On Monday March 19th, 2012, I attended the Warriors vs. Timberwolves game, which was also Chris Mullin jersey retirement night.  They gave away a bobble head too, but it ran out before I got there, bummer!  The halftime ceremony featured a bunch of the guys from the Run TMC days – Mitch Ritchmond, Tim Hardaway, Don Nelson, and Tom Tolbert, along with the other Warriors that have had their jerseys retired – Nate Thurmond, Rick Barry, Al Attles, etc.  Wilt Chamberlain’s wife represented Wilt.  The only down-side of the night was when Warriors’ owner Joe Lacob began to speak, the crowd booed uncontrollably in protest of the recent Monta Ellis trade.  Every time he tried to speak, the boo’s would get louder.  It was super awkward and it was a total drag.  Finally Chris Mullin had to get up and say some words to the crowd, and as always, he handled himself perfectly with a ton of class.  I felt bad for Chris Mullin and his family to have to sit through all of that.  Believe me, I definitely understand the fans’ frustration after 20+ years of bottom dwelling, but I thought it was super disrespectful to Chris Mullin to make this night about anything other than him.  Other than that, everything was super cool, and I’m glad I was there to see his jersey retirement.  Thanks #17!

All of the Warrior players wore #17 warm ups.

Tim Hardaway and his wife were seated a few seats away from me for the first half of the game. 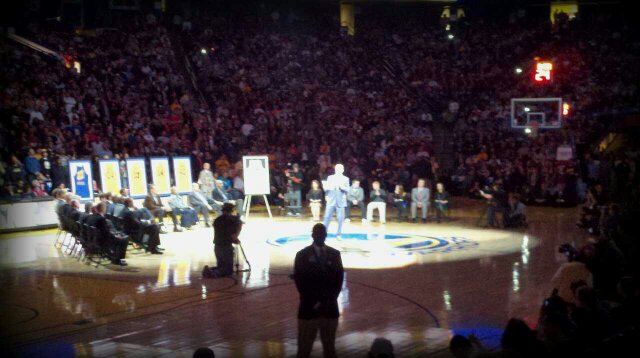 Chris’s acceptance speech with the other Warrior greats sitting to the left with their retired jerseys behind them. 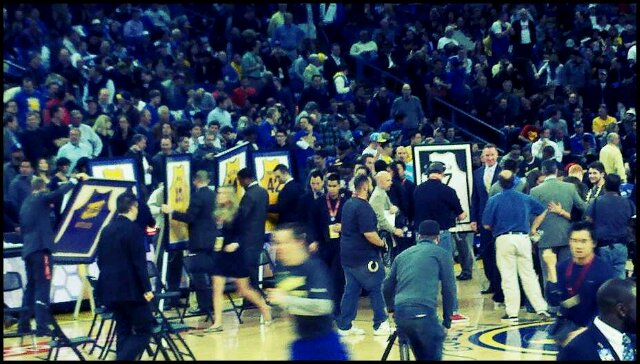 Photo sesh with Chris (right) as they break down the half-time ceremony.